Get To Know The PrimeTime Lacrosse Penguins

Get To Know The PrimeTime Lacrosse Penguins

First things first, how did a Penguin become the logo for PrimeTime Lacrosse?

A buddy of ours, Mike Lydon, was a Penguin for Halloween the year we started PrimeTime Lacrosse, and this is when we were still playing at Babson College.  As you might imagine our marketing budget was a little smaller (zero) back then, and that summer we were promoting the first year of our camps at a youth jamboree in Central Mass. It was slow going at first, and we needed something to stand out from the crowd to get some people over to out tent. Mike had the Penguin suit in his car, put it on, and the Power Penguins were born. 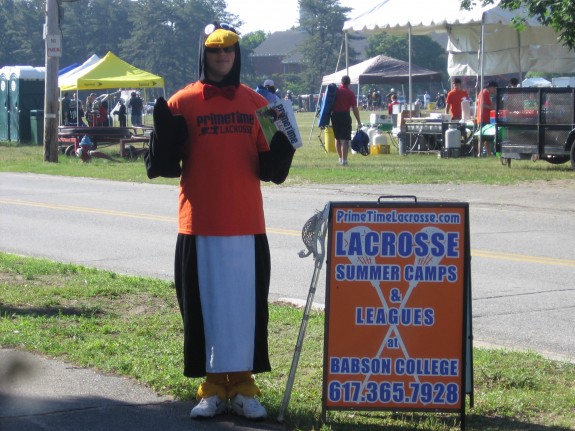 Why, there is a Power Penguin right there!

What was the motivation behind starting PrimeTime Lacrosse?

When Jason and I first started out, we could have never imagined that we would be at the point that we are today. We started the program as a small pick up league for players in my hometown of Natick, MA. We had 50 or 60 players that first year playing once a week. For us, it was really initially about giving younger players more opportunities to play in the summer, and we were proud of that initial pick up league as a fun, affordable place to play lacrosse.

You guys offer “scholarships” for your campers. I can honestly say I’ve never seen this, where did you get the idea from?

When we started really growing our programs and expanding into overnight camps and select teams it was at the height of the recession around 2008 – 2009. We were inundated with requests from families who had children who were tremendously passionate about the game but financial circumstances prevented them from attending our programs.

Jason and I took a look at how we may be able to address these situations and give players an opportunity to participate in our programs who may not otherwise have the opportunity to do so. This gave way to our scholarship program. Looking back for us we knew that positive summer camp and team experiences were memories that impacted us forever, and we wanted to give that opportunity to as many people as we could.

What do you guys do to Grow the Game?

In addition to our scholarships and our overall commitment to getting as many players involved in the sport of lacrosse, we do embrace the culture around the game and love the fact that lacrosse players want to wear the game on their sleeve. We have a retail store in Wellesley, MA, in addition to our online store, where players can purchase our Penguins apparel.

Why should kids/parents be interested in attending PrimeTime clinics? Or being on the team?

In a word; coaching. We pride ourselves on having a staff of individuals that is not only what we know to be some of the game’s best coaches, but people that are role models for our young athletes. At our camps and clinics, you will see a staff that is always engaged, and always available to the players whether it’s on the field teaching players a man down defense or a split dodge, playing air hockey in the dorms with the overnight campers, or helping older campers and Penguins players navigate the college recruiting process that they themselves experienced.

What makes our Penguins Select teams unique is our commitment to developing high-character athletes on and off of the field. Beginning with this summer, each of our players begins the summer select season with an overnight “team camp” that allows players and coaches not only to have a number of practice and skill sessions prior to the start of the summer season, but allows us to focus on team building with the entire Penguins organization.

Beyond that, the team camp includes age appropriate speakers and workshops again designed to build players of character that are truly prepared for the next level. These speakers include things like a focus on the college admissions process, and navigating the temptations of high school and college with our older players, while our younger players begin to learn about identifying and helping to eliminate bullying in their schools, and how to be a leader in the classroom and on the field.

What’s the one MAIN thing you want people to know about PrimeTime Lacrosse?

Whether you are someone who is just learning the game or someone who is committed to earning a Division 1 scholarship, in us you will find an organization completely and totally dedicated to helping you reach those goals.

What is PrimeTime’s view on the growth of the game and how fast it’s expanding? (I.e. Crooked Arrows, etc.)

It’s definitely a cautious optimism from our perspective. The media attention that the game now garners is huge for our sport, and it is very exciting that more and more people will be able to make a living within the game. The nature of the sport I think lends itself to continued growth without limitation geographically. As the game grows, however, I think the need for a strong training program for new coaches and officials is very important so that players can learn the game the right way, and I think having a strong governing body like US Lacrosse behind it is critical to that growth.

If I’m correct there are 9 of you on the PT staff, does having a smaller number of people on staff make it easier or harder to get things done?

We have three full time people in the office and store every day including Jason, Marco and myself. Because of the seasonal nature of the camps, leagues and teams our staff expands to as many as 40 in the summer months. We are very fortunate to have a staff that really buys into our mission and what we are trying to do, so even during the months in which we have a larger staff managing them as individuals is not something that causes us too many headaches. 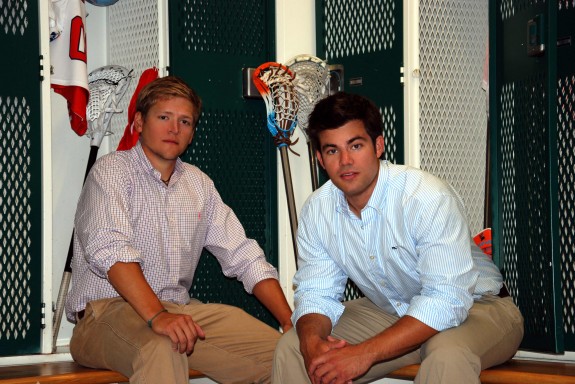 The men behind PrimeTime Lacrosse.

From SICK custom equipment to your own store, how do you guys make all that happen?

For us, it begins with treating each and every person who comes through our programs feels as though they are getting complete dedication to reaching their goals with us. Whether they are in our store and want to pick out that shirt or socks that makes them feel confident on or off of the field, or they are dedicating their off season to training with us it really begins with taking the time to understand our customers.

We have also been tremendously blessed to have strong relationships in the lacrosse world with people who we feel are equally committed to growing the game in a positive nature, most specifically our relationship with everyone at Brine and Warrior and the Boston Cannons who have really played a huge part in getting us to where we are today.

What are the plans for PT’s future?

Keeping the highest level of coaching and instruction in the country has always been at the forefront of what we do, so for us we are only going to grow our select teams to the point where we can honestly say that each and every team has the best coach that age group has to offer anywhere. We are introducing our girls’ select teams this year as well, which is something we are very excited about and also proud to say we have compiled a staff of coaches that will exceed the expectations of players and parents.

Our summer 2012 overnight camps are also being revamped in a way that will allow, older more experienced players to derive a lot more from the programs with recruiting, strength and conditioning, nutrition, and advanced team concepts included in the curriculum.

It’s PrimeTime For The 2019 Lacrosse Season!